With cod, halibut and coalfish being the stars of the show at Sandland Brygge they tend to cast a shadow on the other available species which are sometimes regarded as bycatch but still provide excellent sport, I’ll spotlight the main species in this general fishing category.

Usually caught while cod fishing in deeper water while pirking, these very tasty relatives of the cod are feisty hard fighting fish for their size (1kg – 4.5kg). They can sometimes be found in shallower water inshore and caught on light spinning gear using small 100-150g pirks gently bumped along the bottom on short lifts, much harder fighting than cod of the same size they also return alive very well even in very deep water.

Often mistakenly called torsk which is Norwegian for cod, a much maligned species widely regarded as a pest fish much like Lesser Spotted Dogfish are in the UK. They will take anything you put down, baited or unbaited in anything from 20-300m. They are good to eat and are a favourite among Norwegians. Very prone to barotrauma (the bends) and more often than not will just float away when returned even in as little as 20m of water.

Targeting redfish at Sandland Brygge requires a specialised approach, the biggest of them live in very deep water of 200m or more and the very best mark for them in our area is 400m deep which produces jumbo reds to almost 10kg. Multiple baited hooks with at least 1kg of lead, small tides and calm conditions are needed for these deep marks; they are mainly targeted by our European guests who use electric reels to handle the difficult conditions. Occasionally small ones of 1 – 1.5kg get caught while cod fishing in normal depths. Once in a blue moon big ling get caught out in the deep redfish marks; the camp record for these is over 25kg.

Ugly to look at but beautiful to eat the catfish are a bit like marmite, love them or hate them. The main season is spring and summer; they become a bit thin on the ground during the autumn. There are two species of catfish at Sandland Brygge, the normal common grey kind and the Spotted Catfish which are very rare in our area and only occasionally encountered on rod and line, usually in deep water.
If you want to target cats most type of end gear will catch them, baiting the hook on your pirk with a small piece of coalfish will almost guarantee a hook up during the peak season when you fish between 25 and 40m out on the Sandland Plateau. Watch your fingers when trying to unhook them, I find a pair of boga grips useful to secure them safely enough to get sufficient grip with pliers to remove the hook. Catfish are a very good eating fish, the texture and flavour is like plaice in my opinion.

Plaice and other flatfish

Plaice and dabs are the most common of the smaller flatfish caught at Sandland; there is also the occasional lemon sole and turbot caught while fishing on the same marks, while not strictly a true flatfish the occasional starry ray is also caught on the same sandy areas using plaice tactics. Plaice to over 4kg have been taken on rod and line at Sandland along with a lot of 1kg+ dabs. Usual flatty tactics work for all these species, use strong hooks though as small to medium halibut frequent the sand and will bend out hooks if too fine in the wire. My favourite bait for all these flatfish is mackerel strip, though prawns, squid and black lugworm are also great, some of our visitors from the south of England do very well using artificial bait such as Isome Worm and Gulp! One of the best areas to fish is off the beach at the south end of Loppa Island, fish on the sandy areas in 15-20m, they are very much localised here and need patience to find them, as soon as you hook your first plaice save the coordinates in the plotter and concentrate your efforts around this waypoint.

Although not 100% sea fish sea trout can be caught spinning and fly fishing within the harbour from the boat pontoon, on the outside of the harbour arms and from the beach in front of Sandland Village itself. There is a lake nearby which gets a really good run of these beautiful fish, there are small boats at the lake available to rent from the office, a license to fish for sea trout in the lake is required, these are also available from the office. The occasional Russian pink salmon is caught when spinning from the pier in summer, the advice is you must kill these when caught as they are an invasive species, on the plus side they are very very tasty. 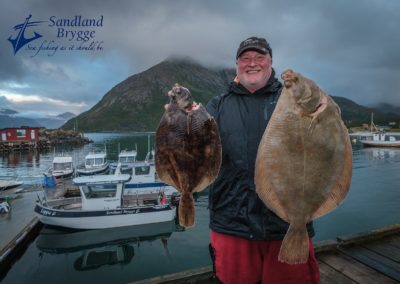 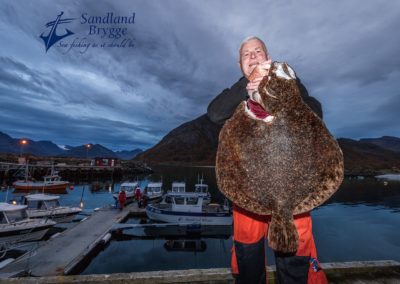 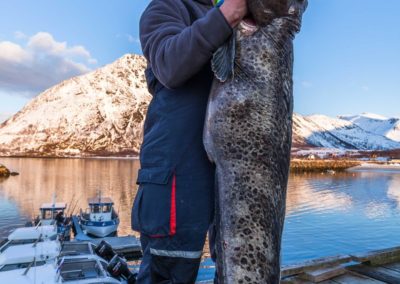